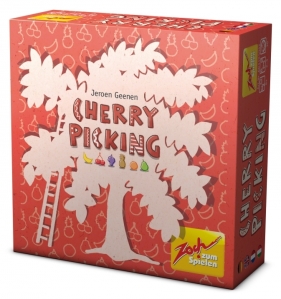 Cherry Picking is a small box set collection card game that plays in about half an hour. It costs less than £10 and can accommodate two to six players, putting it in solid ‘filler’ territory.

As the box suggests it has an almost childlike, family friendly card style and theme that, while beautifully realised, don’t really add to the game.

The card stock is more than adequate, the rulebook clear and simple; overall it’s a very professional package (as you’d expect from publisher Zoch). Set up and pack down are also very simple as all but six of the cards form a single deck. The only fiddly thing is you have to remove certain cards if playing with two, three or four players, but this is easily done. 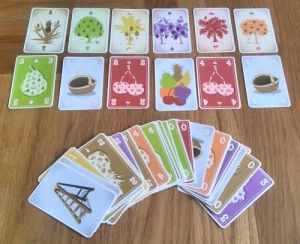 The rules of Cherry Picking couldn’t be simpler. Players are dealt a number of cards and, on each turn, everyone will choose and play one of these cards simultaneously.

To set up, place the six different coloured ‘tree’ cards (think of them as suits) in the middle of the table. You then shuffle the deck, place a card beneath each tree, then deal the rest of the cards to the players.

In brief, you just need to tell people each card they play will allow them to take a card from beneath one of the trees and place it in their scoring area – so by the end of the game they’ll have the same number of scoring cards as they started with in their hand.

There are four types of cards: fruits (in the six ‘suits’) and three types of wild card. Once revealed they are placed in a specific order – so if a card you really want is out there, you may think you want to play a wild card that will be played early in the round.

But here’s the trick: If two of you play the same type of wild card, you keep those cards instead of taking a card from the centre. Keeping wild cards isn’t often a bad thing – in fact it may work out better than getting what you’d hoped for.

End game scoring is what you really need to get across. There is a player aid, but its the kind of ‘aid’ that only really makes sense once you know what you’re doing anyway. You basically want sets – but they have to very specific to get you points. 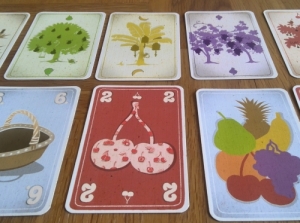 Some players simply find Cherry Picking underwhelming. Themeless card game fillers tend to have rather obvious take-that elements or moments of great loss or triumph; and as this doesn’t it can be seen as missing one of the key elements of the genre. One person’s charming is another’s lacklustre.

Then comes the luck element: how much of the game is chance, and how much skill? When playing poker it becomes immediately obvious that the read is everything, but then bluffing is an element – and there’s no real bluffing in Cherry Picking.

But with just a bit of experience you can start to see the optimal moves and try to play around them; but of course, to do that, you have to get past those initial games where it can seem – and be – all about the luck of the draw.

And here the scoring doesn’t help much. With it only happening at the end of the whole game it can be confusing until you’ve played through once – and again, will you have liked it enough to want to play again? 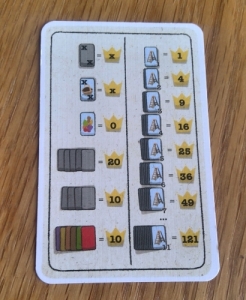 Personally, I think first time designer Jeroen Geenen should be applauded for creating a fantastic little card game; but I fear the rather lacklustre theme may mean it doesn’t quite reach the size of audience it deserves.

If you like traditional card games such as rummy I would definitely recommend you add this to your collection. The simultaneous action selection is a lovely twist on a tried and tested theme, while the multiple styles of wild card also add a lot to the genre.

The luck/skill ratio will seem out of whack for some, but often I think unfairly. This is a 30-minute filler, but doesn’t often seem to be judged on that criteria – probably due to the nature of the gameplay and the lack of table talk/take that attitude on display.

I’ve enjoyed every game I’ve played, although it should be said the two-player variant in the rulebook isn’t great (the designer has an improved one here). The game is quick, simple and cunning while giving some real head-slap moments when you just get pipped to the card you want.

Would it benefit from a more traditional theme, or some more aggressive cards to add a little spice and ways to get around some of the randomness? Possibly for some – but I like it just the way it is, thank you very much.