That stunning box art in all its glory

Felinia is a family/gateway board game with a very odd cat/trading in the Mediterranean theme (seriously).

But if you can get past that you’ll find an enjoyable mix of bidding, set collection and area influence mechanisms (plus basic exploring in the basic game) that plays in about 90-120 minutes.

Inside the box you’ll find a lovely double-sided board, each side of which displays a port on one side and an unexplored island on the other, divided by the sea. There’s also an array of wooden markers, player boards, goods chits and cards – plus a very nice dice bag and four snazzy snap together cardboard ships.

We learnt the rules from the rulebook without incident and with no need to sneak off to a website for any clarifications. This is helped by the there being an easier version of the game (hence the two-sided board) which served as a nice introduction to the main rules. If you’re used to strategy games you could probably skip this completely, but it’s still pretty engaging and would certainly be good for younger folk. I won’t go into it further here though as it’s not different enough to justify a lengthy description.

Teaching the game is made incredibly easy by dint of it very much being a game of two halves: in the first part of each turn you bid for and then buy goods tiles, which will in turn give you access to sail your traders off on ships.

Then you’ll all sail off to the island to stake your claim on various parts of it, scoring points and bonuses in the process.

The biggest barrier to entry at this stage is in fact the terrible choice of colours used for the goods. These are printed very small on the boats themselves and helpfully include light brown, dark brown and grey – all of which fade into each other, even for those with good eyesight. But a bit of leaning over the board and squinting never hurt anyone, right?

Money is in very small denominations (you can never have more than 6 coins), while you’re unlikely to have more than three or four goods at once – plus maybe a few of each of several card types. The island only has four or five types of scoring marker in the basic game, while the advanced version adds some individual bonus tiles and a few more cards.

Nothing is really hidden (except a couple of simple cards in the advanced game), so it’s easy to help along a player who is finding things a bit tricky to pick up. And the game is played over probably 10 rounds or so, which means everyone gets the hang of things after a few rounds. I’d certainly put Felinia firmly in the gateway game category. 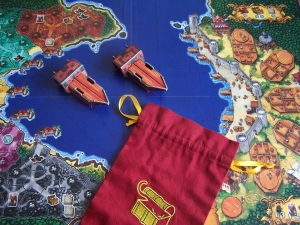 There are some great components in Felinia

Michael Schacht is a designer with a lot of games under his belt, so he’s clearly pretty popular with publishers. But he only has 2000’s Web of Power in the top 250 on BGG, so what’s all the fuss about? The answer is clearly the evergreen family range of ‘etto’ games (Coloretto, Zooloretto etc), which have shifted a ton of units – and rightly so.

Looking at his more popular slightly heavier games, such as China, Valdora and Hansa, its clear theme is very much an afterthought for Schacht. This is of course fine, and pretty common in European design – but does highlight the problem that if you drop the ball on your pasted-on theme, you can bury a solid game before it even gets to the shelves. For example, if he’d swapped China or Hansa with Felinia in terms of theme, would their popularity have reversed?

I think the poor theme also hints at a larger problem, which is that overall you get the feeling with Felinia that nobody involved in the finished product really cared. I know this is a pretty unpleasant accusation to level at a publisher and designer, but look at the facts:

With any of these examples, you’d think one person could simply have put their hand up and said, “hang on – this is terrible but pretty cheap and easy to fix”. That no one did, or that they weren’t listened to, is pretty sad. 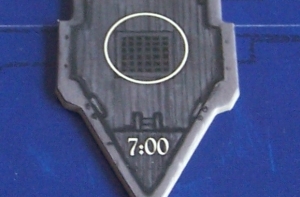 I can see this becoming a regular feature…

But despite all this I’m going with a 7/10 for Felinia, just a fraction above its BoardGameGeek average score. And that is no reflection of the cheap price I paid for the game.

Sure, I wouldn’t have chosen to pay £30-40 for it, but I don’t think about what I personally paid for a game when giving it a rating.

I’ve found it enjoyable with two, three and four and there are interesting decisions to be made in the advanced game. At the same time, the basic game is a good way to learn the basics and should be suitable for younger players (or those not really into board games). Overall, it’s a solid family/gateway game and definitely worth the low price you can currently find it at in The Works in the UK.

Finally, while I’ve had-at the theme, I don’t see it being a barrier to enjoyment. In fact the crappy box art and pasted-on nature of the cat idea is a nice comedy ice-breaker before play – and once people see the nice board and ship pieces any reservations about the theme (which is only really on the box) soon disappear.

NOTE: For UK readers, this game is still £10.99 from The Works at time of posting.