The fantasy theme is nicely realised in the lovely artwork, but doesn’t really extend into the gameplay (which is pretty much abstract). But the components are good quality, making it look great on the table and be comfortably worth the money.

The game can accommodate two to four players, with the only real difference being more players equals fewer rounds – so the game takes a similar length of time no matter the player count.

In addition to the base game there are several mini expansions packed into the box. I haven’t tried them yet, but they all seem to add little twists to the gameplay and anything like this thrown in for free (rather than trying to rip you off later) definitely earns a publisher brownie points with me. 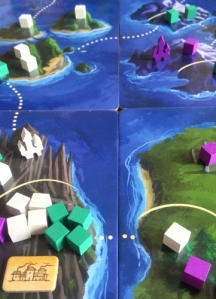 Eight Minute Empire: Legends couldn’t be much simpler to teach. Once the modular board is set up (again offering replayability) and the starting units placed (a quick process) players simply take it in turns to draw a card and then carry outs its action.

This continues until each player has a number of cards in front of them, which is set by the number of players (8, 10 or 11 in a four, three or two-player game respectively). You then total up your points et voilà, game over.

Each card has three properties: name, action and bonus. Names are only useful in set collection (so if you have several ‘Cursed’ cards you’ll want to look out for the cursed bonus card, for example), while actions and bonuses are the crux of the game.

Card actions are how you manipulate the board situation. Cards either let you place a castle; place troops (at any of your castles); move troops, or kill the opposition’s troops. There a few intricacies, but nothing major – and as all information is public it’s easy to help out new players as you go along. 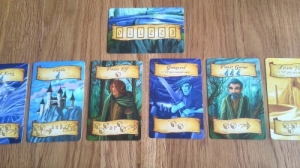 But a key part of the game is the economy. Each player always has six cards to choose to buy on their turn, ranging in cost from 0-3 coins. you start with about as many coins as you’ll take cards, and that’s all you’re likely to get, so you’re forced to choose your pics wisely.

Once you have a card in front of you, it will also give you a bonus for the rest of the game. These are pretty evenly split between the board (giving you small bonuses to your actions from then on – perhaps an extra troop if you take troops, move movement if you move etc) and end-game points (for card sets, or other end game bonuses).

You should find all the types of action have happened during the first couple of rounds, so players are soon into their stride. And all the cards are seen in every game, so by the second play you’ll be veterans.

The likes of El Grande and Tigris & Euphrates are hugely popular games that absolutely nail the area control genre. Their 90-minute playtime isn’t an issue because these games need to give you time to fulfil your strategy and play out your tactical moves.

If you really do want a tiny bite-sized version, there’s Coin Age: an essentially free area control game that actually does play out in 15 minutes. So dis there actually a niche that 8-Minute Empire: Legends is actually filling?

I can’t help thinking it is falling between these two stools, neither capturing the depth of the big games or the immediacy and simplicity of a true filler; which I think explains the number of “it’s OK” responses I’ve seen and heard.

But it’s one of the games I’ve had the most “what if…” responses to as well. After a game you’ll always get players making suggestions of what they could do to make it that little bit better. This says to me that people like it, are charmed by it; that they think it could be a great, rather than a good, game.

The fact it came out so close behind the original Eight-Minute Empires suggests this may have been an issue with the original too; as with so many Kickstarter games detractors are going to ask, was it really tested and developed as thoroughly as it should’ve been? Otherwise, why the need for such a similar follow-up the next year? I can’t see that many people will feel the need to own both, or prefer the original.

I’m going to put this out there: I think the definitive 8-Minute Empires game is yet to arrive and when it does, it is going to be a classic. I also think some (OK, me) will resent the fact they’ve essentially been beta testers for that great game through previous iterations, but will be happier it arrived so will suck it up.

Right now, for me, each player number of ‘Legends’ has small problems. With four you don’t get enough turns to fully explore the game’s options; with three there is too much chance of the one vs two scenario happening and you’ll always get the feeling the player who won was the one who got most ignored; while with two there simply isn’t enough reason to get in each other’s faces.

Some more cards would fix the four-player issue – and expansions are on the way – but that would of course make it even longer. Two players can be helped by shrinking the play area, but then we’re into house rules again. Unless there’s an official 2-vs-1 variant in the offing, I think three players will always be a problem.

But I usually enjoy my plays – just not quite as much as I think I should. Is my anti area control bias kicking in? Maybe. Is my love of the art style making me give it too much of a chance? Possibly. Will I keep playing? Absolutely. For all its flaws, I’m a fan of the Eight-Minute Empire franchise.

So what conclusions should you take away from this? I guess the main one would be to try before you buy. There are some very clever ideas here and the game has an elegance and simplicity that should be admired. But it certainly isn’t for everyone, as what it lacks may frustrate you more than the bits you enjoy.