Infiltration is a simple push-your-luck card game with a strongly thematic character-driven adventure cleverly woven in.

It was designed by Donald X Vaccarino, the man behind way more abstract classics Dominion and Kingdom Builder. But the thematic side works very well here.

The game plays out in less than an hour and is relatively simple to set up and play, while nicely building tension throughout.

Infiltration is set in the same ‘Android’ universe as the highly successful Netrunner card game and has the high production values you’d expect from publisher Fantasy Flight. It comes with 38 standard cards (a random 13 of which make up the place you’ll be infiltrating); 76 small cards (Ticket to Ride/Arkham Horror sized) which are mostly item/action cards you’ll have in your hand; plus a bunch of cardboard chits and a dice.

There are also character cards and standees (purely for theme), plus the dreaded security tracker (more of which later). At around £20, it’s good value for money.

Thematically a game of Infiltration sees you leading a hacker each (or two each in a two-player game*) room to room through an office building, trying to steal as much data and as many useful items and weapons as possible; then getting out before the cops arrive.

In reality you move your player piece from face-down card to face-down card, revealing them as you go and (hopefully) collecting one-time bonus actions and victory point chips. I’m not denigrating the theme – just showing how simple it is. It’s only really the thematic chrome that adds any complication, but even this is minor.

Each player has a hand of cards. Four are the same for everyone and you’ll have them all game: advance, retreat, interface, extract/download. Each room is unique. Some will be basic, usually having an item to interface with for a bonus plus data to extract for points; others will house NPCs that help ratchet up the tension/mayhem.

You also get four random equipment cards which are used instead of the standard cards to do better, often one time actions. At the start of each round, players simultaneously choose a card then take it in turns to do their action – they hope.

Here’s where things get interesting. The chance to be first player moves clockwise each round. Locations have limited resources and you choose actions simultaneously; so if you begin in the same location as other players, will there be anything left to interface with/extract by the time it gets to your turn? Should you move instead? 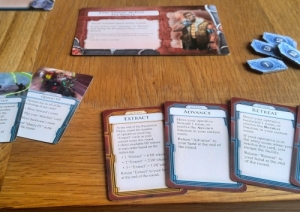 In addition, each round the chance of the police arriving increases. It’s not purely random, but nasty locations can see your best laid (risky) plans go to pot.

So collecting lots of booty is great, but at some point you gotta run or go to jail (AKA lose). This simple push-your-luck mechanism isn’t big or clever but if it ain’t broke, don’t fix it.

The only thing you may have trouble with is the equipment cards, as these need to be kept secret by players but are all different – making teaching a tough ask. My advise would be to go through the basics then play through a quick game, explaining clearly it’s a training game that doesn’t count. People can try to win on the second run through!

*Note: I’ve only played two-player once as neither myself or Zoe enjoyed it that way; the dynamic didn’t feel right. I don’t have the experience to go into more detail, but I’d suggest reading some two-player reviews if that’s how you expect to play the game.

The most common issue, unsurprisingly, is that Infiltration is too random. While it may seem an odd complaint to make about a push-your-luck game I do have sympathy with it. There are a lot of cards and items so you’d think they’d give you a bit more control over your destiny than a straight dice or random draw fest – but no.

A related issue is how different each game is – and not in a good way. As is often the way with thematic games relying on random factors, you can have an edge of the seat experience one game and a borefest the next. In Infiltration’s defence, it lasts less than an hour and you know what you’re going into from the start. No, it’s not for everyone.

One big issue here is equipment cards. These go from uber to situational (so may never be useful), and if you get a handful of the latter you’re unlikely to be in for a fun time. In the game’s defince it does include both a set equipment variant (based on which character you get) and a drafting variant. Why these are buried at the back of the book under ‘advanced’ rules is beyond me; some set equipment should’ve been standard.

Finally, both the fiddly nature of all the bits and the cyber-fi theme aren’t exactly universally popular. If you like the idea of the game but want something more traditionally ‘euro’ it is definitely worth exploring Incan Gold – although that works better with a higher player count. 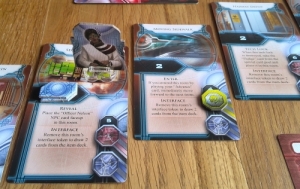 I’m very happy I own Infiltration and while I don’t want to play it every week it’s a fun one to get to the table now and again when in the right mood. It’s a shame the two-player version didn’t work for us, but it’s fun with three or four.

If you are happy with sci-fi/cyberpunk, like a lot of theme in your games and are also happy with a strong element of randomness I recommend it. It has the trappings of much longer games such as Arkham Horror or Descent but in a nifty one-hour time frame, which is sure to fill a gap in many a gamer’s collection.

This is not a game I’m good at. I’ve only won once, having lost horribly on several occasions, but I’ve really enjoyed all but one of those experiences: one was really predictable, and that was the one I won! It’s the nature of the beast – and I think Infiltration is fun enough to suffer the odd below average experience.