I lost my ability to play ‘twitch’ computer games shortly after Road Rash came out for the Sega Mega Drive. So for the last 100 years or so I’ve contented myself with RPGs; I can play them at my own pace, while the writing quality is usually better than your average fantasy novel.

In the late 90s I mostly disappeared into the world of online MMORPGS. But because of this online addiction I never really got into the BioWare line of RPGs that started with Baldur’s Gate. I tried them, but they didn’t stick – I wanted that online community.

Now I’ve pretty much given up on MMOs, I’ve rediscovered the turn-based RPG thanks to Spiderweb Software. I didn’t want to go back over old ground, but these games had that old RPG feel but in their own universe (rather than cadging off D&D) – perfect.

In short, they’re brilliant value for their low price ($20 or less). If you take good writing and storytelling over fancy graphics (the graphics really are quite small and zooming isn’t an option), and love turn-based RPG combat, seek them out. I’ve been totally immersed and don’t regret a single hour of the 100+ I’ve sunk into them.

It’s also worth noting that as well as being available on PC (including Steam) and Mac, both games are also available on tablets – both for iPad and Android.

I’ve now played through both Avernum: Escape From The Pit and Avadon: The Black Fortress and while they share a lot in common there are some huge differences. So what sets each apart from the other – and more importantly, which is best? 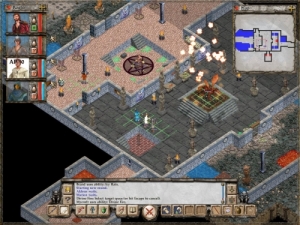 A battle begins in Avernum

In Avernum you find yourself exiled below the world’s surface; a place populated by criminals with no hope of return to the world above – and plenty of beasties.

But as you begin to explore you find it’s not totally lawless – and better still, there are rumours of a way to escape to the surface.

I was immediately drawn into the world which, while typically fantasy in many ways, has enough originality to hook you in. There’s even hints at even stranger previous occupants, adding the possibility of a little sci-fi in the mix…

Avadon has a more typically fantasy set up. You’re a soldier seeking to make your name in a force that governs over several lands united purely by the protection you offer. They don’t like each other and like you even less – but they have to respect the power of your leaders. Your base is the castle, but you are sent on errands to several different settings to sort out a host of problems (goblins, ogres etc) – while as you go along a bigger intrigue continues to build to a crescendo in the background…

In Avernum you build your party the old fashioned way, meeting brothers in arms who soon join you in your quest and fight by your side – there’s not much more to it than that. But your main character has to make interesting choices along the way as you start to see more of the political picture. You have opportunities to be a right nasty bastard if you want to, or play the typical hero to the end. You’re soon up to a party of four which you can switch around as suits you.

Avadon tries to do things a little differently. You have several companions foisted in you when you get to the castle, each of whom has their own little story to tell – and at some point a side quest you’ll join them on (if you like). As mentioned above you’re all soldiers, so I found it quite hard to get into character – if I was him I’d have deserted after five minutes. Also, there’s a Steam achievement for completing the whole game and only taking one companion with you. I did it this way, so it was  pair rather than a party.

Levelling and the UI 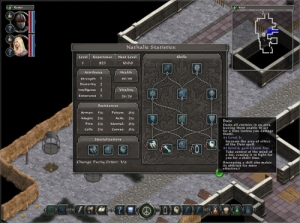 Avernum offers a high level of customisation for every character, with a very large range of skills available.

But the amount of choice didn’t really seem to correlate with the amount of difference it made to the game, as equipment drops tended to make decisions for you as you meted out the gear to your party. The world is also full of useless items – or are they?

It was frustrating to start leaving behind items (like shovels) that are worthless in shops, only to later find some quest giver wants 10 of them. Definitely too much crap.

Avadon is the slightly more polished game and here it shows. The skill choices have been honed down well, meaning they’re meaningful but sensibly limited – there’s probably half the choice, but I didn’t find that in any way restricting as your party member choices (thief, magician etc) are the more significant decisions.

The world is still full of crap, but now it is obviously crap you can ignore with impunity – a great relief. In general, everything just seemed that little bit more considered, in a good way. 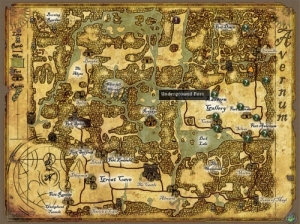 The huge world map of Avernum

Both games are very well written, plotted and paced. They skilfully reveal more and more plot the more you search, while twists and turns – as well as choices – are common. There’s humour too, alongside some great side quests and plots.

I much prefer a sandbox though, and while Avernum very much leads you down a particular path around its one huge map it cleverly gives you the impression you’re leading the exploring. You can actually run over an awful lot of the map from very early – but if you bump into anything on the way you’re going to be in big trouble.

Avadon has several large play areas but it feels much more instanced and very much hand-holds you from quest to quest. That said you do still get the feeling you’re exploring each new area and sometimes you may find levels within levels that are out of your depth for now, knowing you’ll be back later.

Graphically the games are almost identical. This is a little bit of a shame, but then the familiarity is nice too. Sound effects are equally similar and pretty average; they certainly do the job without being spectacular. 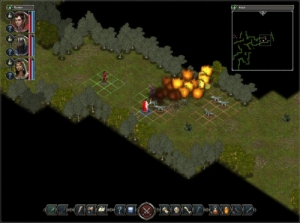 A battle in Avadon

I played both games on the normal mode and while I didn’t have much difficulty with either, some of the bigger boss battles in Avernum definitely proved trickier.

Even with less party members than I could’ve had, Avadon was mostly straightforward but with a decent level of challenge at times. However Avadon definitely had the best single idea combat scene, in which a room is slowly filling with water as you try and fight your way to the exit. I’d call this section a draw, as playing with two was fun – as was playing with a fuller party.

Avadon: The Black Fortress is a good budget RPG. IT tells its story well, never crashed and kept me interested for many hours. However I never really connected with my character and, having played Avernum first, I misses that big old map to explore freely. The sequel is out and unfortunately I won’t be buying it; I’m not cut out to be a soldier!
6.5 out of 10

Avernum: Escape From The Pit is as close to perfect as I could’ve hoped for a cheap solo RPG. I was hooked from the start, loved my lead character and the world he was in, while the ending was epic. It was a bit cluttered and clumsy at times, but it was worth it. Bring on the next one! And until then, there are seven older Avernum games out there…
9 out of 10

NOTE: All screenshots are taken from the official Spiderweb Software website.