Bruges is a card game with a board, or board game with cards, depending on your point of view. And then there’s the dice… Let’s just agree for now that it’s a game for two to four players that plays in about an hour.

As the title suggests we’re in the Belgian city of Bruges, but as this is a game by Stefan Feld you can essentially leave your theme at the door – you won’t be needing it here. The game is retailing at around £40 right now (March 2014) which isn’t cheap, but there’s a lot of bits (and a lot of game) in the box.

For the record, we’ll rather abstractly be doing the following: building canals (and maybe statues), gaining political influence, building houses, housing people in them (who will then do our bidding) and finally – surprise surprise – scoring victory points. In fairness, the people bit isn’t that abstract. But the rest of it is.

In terms of components, the game is pleasantly functional without ever being outstanding. The cards are of nice stock and clearly laid out although the art is nothing to write home about. The board and cardboard/wooden bits are all fit for purpose – no complaints, but no gold stars either. The rulebook is very well laid out and simple to understand.

It took me a full five games to make my mind up about Bruges – and it usually only takes me one or maybe two. So what’s that all about? 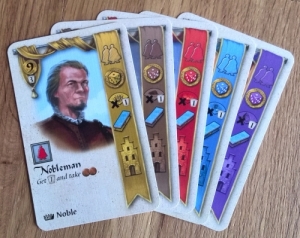 Bruges is a slightly frustrating game to teach. There’s lots of options, all of which need to be explained before you get going; I can guarantee you’ll see some faces glazing over.

But once you get going, people with even a modicum of euro experience will be up and running in no time – there are fantastic player aids too, but I doubt people need them.

The game’s pieces are evenly divided between blue, red, yellow, brown and purple (these are not player colours – those are the standard red, blue, green and yellow). There is a dice in each of these five colours, alongside workers, cards, disaster tokens and canal sections (the latter on the rather superfluous board).

Each round, players draw to a hand of five cards from two stacks, housed in cute (and very useful) little boxes. The card colour is visible on the back; so if you need workers, houses or canal sections – or to mitigate disasters – you can go for those colours. But thanks to the little boxes, you can only see the colours of the two top cards at any time. 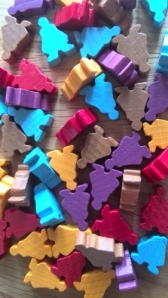 On the flip side, each of the 165 cards is an individual personality. Every card can be played to do any of the game’s six actions, and each player has four actions per round. So, a blue card could be used to gain blue workers, build a blue section of canal, mitigate a blue disaster, build a blue house, gain money equal to the round’s blue dice role, or to put the individual personality into play (into a house you’ve built – regardless of colour).

After everyone has a hand of five, that round’s start player (which moves clockwise) rolls the five dice. 1 and 2s add up to the cost of gaining political influence that round (boring), 3 and 4s do nothing, while 5 and 6s mean… disaster! Everyone gets an appropriately coloured disaster chit. If anyone now has three of the same coloured chit, bad things happen to them (lose workers, money, a personality etc).

Otherwise, you move on to actions. These are all straightforward and you’ll soon be zipping through the rounds. Where the game shines is around these actions, which is where the personality cards become significant.

Once in play these personalities will serve a function; essentially bonus actions or abilities you can use on your turn. Some only take effect once, others every turn if certain conditions are met, others cost workers to use, while the rest will give you bonus endgame victory points for fulfilling certain criteria.

The colour of the personality’s card isn’t significant here; it’s a complete mishmash. In fact they are actually split into 11 different professions regardless of their card colour, just to make things more complicated – even though it doesn’t really. It’s way simpler than it sounds, but I wasn’t joking when I said you have to play and then it becomes simple.

Anyway, to recap, you’ll be using cards/money/workers/dice to gain points/houses/workers/canals/money/personalities/influence – or cause/mitigate disasters. Simple. When the cards run out, the game ends (you only use about 35 cards per player). 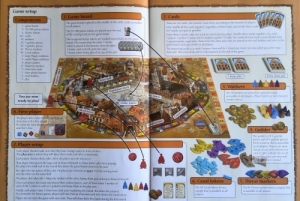 The randomness of 165 cards is an obvious barrier for some – especially when those are split into five colours and, within those, spread between eleven different profession types.

Add to that the fact many use workers of different colours than the card themselves to operate, it’s tempting to go back and capitalise RANDOM every time I’ve used it above. If you really don’t like random – ever – stay away. But otherwise, I’d give Bruges a shot. Why? Because there’s only one way not to play Bruges, and you guessed it: don’t rely on one way to get the win. Secondly, it’s a one-hour card game – if you don’t win today, you’ll win tomorrow. The important thing is to have fun, and there’s a lot of fun to be had here.

A common criticism of Stefan Feld games is that they’re a ‘point salad’ – there’s a million ways to score, etc etc. While this may be true to a point, as a blanket criticism this doesn’t make sense – especially not when discussing Bruges.

Sure, there are several things you need to count up at the end – you’ll have scored a few points during the game and there are six ways you can get end game points. But seriously, it takes five minutes to do the scoring; Ticket to Ride takes longer than that to check all the routes at the end of the game! It’s a totally moot and lazy point.

One final point to be made is setup. The game has a lot of moving parts and as nice as all the wood and cardboard is, it’s a lot of work to go through if you’re only going to play it once. As mentioned before the board seems mainly superfluous and when you think of what has been achieved by a game such as Race for the Galaxy, which is essentially just a deck of cards but with even more moving parts, I have to think the same could have been done here.

So why did I struggle for five games deciding on whether I like Bruges? I think I’ve gotten to the bottom of it.

Those first three games were with several different opponents, all of whom had to be taught the game. By the time you start playing and getting into it, its all over – and out comes a different game.

It can be hard to think the game’s about ‘fun’ when it’s hard to teach, but once you have a group who are all familiar with it the game really starts to shine. The two recent games, with experienced (ie, played once) players have been a blast. Quick, chatty, random, slightly thinky and with a good bit of ebb and flow.

Right now I’m rating Bruges an 8 – I’ve embraced the randomness and feel a better gamer for it. All I had to do was start thinking about it as I do about Thebes, rather than some of the tougher Feld titles, and I was home and dry. So now I thoroughly recommend it; just don’t rely on a single play with a group to make your mind up.