“Grown-ups love figures. When you talk to them about a new friend, they never ask questions about essential matters. They never say to you: What does his voice sound like? What games does he play? Does he collect butterflies?”

The Little Prince: Make Me a Planet is a quick playing (20-30 minutes) tile placement game for two to five players that retails for less than £20.

The whimsical artwork on the 80 sturdy cardboard tiles will be familiar to anyone who has read The Little Prince; beyond that you just get five player markers (the scoreboard is on the bottom of the box) and a short rules sheet.

If you strip the theme away, players are drafting their own four-by-four grid of tiles over 16 short playing rounds (more on the drafting later).

Four of these tiles will determine what symbols you will need on your tiles to score points; whoever scores best from these tiles at the end of the game wins.

But to strip the theme away would be to do one of the world’s finest children’s books a terrible injustice. It would reduce the game to figures – that’s what an adult would do! No. To truly understand the charms of Make me a Planet, you need to first understand and have met The Little Prince.

The Little Prince is a novella written by French writer and aviator Antoine de Saint-Exupéry and first published in 1943. While many in the UK haven’t even heard of it, it’s one of the best selling books ever published with well over 100 million sales worldwide.

Saint-Exupéry wrote the book while exiled in the US after the fall of France during World War Two (he flew in a recon squadron until 1940), where he had travelled to try and persuade them to join the war.

Shortly after the book’s publication and against the will of friends and family, he rejoined the Free French Forces. He was lost in action in 1944 on a spy mission, three weeks before the Liberation of Paris.

Rather than being a children’s book, The Little Prince is a book written for a child; there’s something personal about it’s style that reads like a letter and a tone that doesn’t talk down to the reader. And more importantly, as with all good children’s tales, the older you get the more levels of meaning you begin to uncover.

On the most basic level,we find an airman fixing his crashed plane in the desert – where he meets the little prince, a visitor from a tiny planet. The little prince tells the airmen of his travels and all the strange adults he has met on other planets (from the king to the lamplighter, the drunk to the geographer) and the two become firm friends. But the more the prince tells of his tale, the more he realises he misses his own planet.

Beneath this, as hinted at in the quote at the top of this page, is a study of the human condition; a desire by the author for people to take a fresh look at the absurdity of the adult world from a child’s eyes – to see the beauty of the simple things and relish them, rather than tearing each other apart over meaningless boundaries and beliefs. Most of us can now only imagine what it must’ve been like to live through such turbulent times.

What’s wrong with this finished planet?

The game itself is very simple; where it comes to life is in the drafting.

There are four different styles of card that will make up each player’s planet: 4 character corners and 12 planet tiles (four middles, four left curves and four right).

With three to five players, the start player draws enough tiles for each player to get one, all from the same stack, and lays them out face up on the table.

The start player chooses one  tile for their planet, then chooses who gets to pick next. Whoever has to take the last tile (so has no choice) becomes start player – so decides which stack to draw the tiles from, and which tile they want to keep etc. At the start of the game, there will be exactly enough tiles put into play for everyone to build their planets. 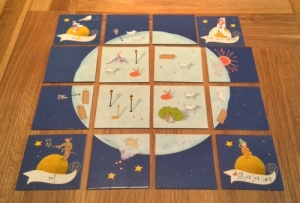 If you answered above that three of the baobab trees should’ve been flipped over, well done! Have a biscuit

Two-player is a little different. There’s enough tiles used for three players, while start player simply alternates between the two of you. However, you draw three tiles, look at them, and place two face up and one face down. The other player chooses first, then you get your pick of one that’s left – the other is discarded.

Scoring tiles are clearly explained in the rules; you’ll either score for having one of each of several things (so the Hunter will score three points for each different type of creature he has – snake, fox, sheep, elephant), or for multiples of the same thing (The Little Prince scores one point for each box on his planet, for example).

But there’s a little more game to it than simple addition. The player who finishes with the most volcanoes will score negative points for each one, while if you ever have to take a third baobab tree tile you’re forced to flip all of those tiles over to their blank side – they won’t score for any items on them. But maybe you can turn this into a positive…

I’m not going to turn literary critic here; people have studied The Little Prince within an inch of the poor little chap’s life and I feel no need to wade in.

The game’s real discussion point for me is how the tone of the game fits – or fails to fit – that of the book. Does a short and highly random take-that game really portray the themes of friendship and understanding the book seems to reach towards? In a word, no.

But I don’t see this as a problem. What the game does instead is bring to life The Little Prince’s universe; its crazy adult characters and the ways in which all the things in the book work for, or against, each other. It’s a celebration of the whole zany, flamboyant Frenchness of it all, rather than the well trodden if charming sentiment beneath.

Or a different take on tone; while The Little Prince can be seen as a children’s book it isn’t really – and it certainly isn’t a young children’s book. At its best, as explained above, it is seen in context – and that is as a call for calm and reflection in a 1940s world gone mad. If anything, a crazy take-that game where you’re desperately trying to keep your planet in order while everyone else plots against you seems highly appropriate! 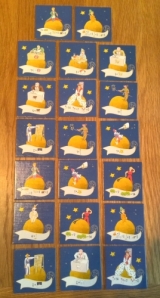 I came upon The Little Prince: Make me a Planet totally by accident. I have no recollection of reading the book as a child, or of being aware of it as an adult. Equally I had no preconceptions about the game; I’d heard a few mentions of it as a fun, short tile laying game (which I had a dearth of) and picked it up purely because it was a bargain at Essen.

And yes, I was drawn in by the art – and then pleasantly surprised by the gameplay. But while I enjoyed the cut and thrust a great deal, I was equally enthralled by what stories must be behind all the crazy characters – so I picked the book up too.

A quick read of the back of the jacket, plus the dedication in the front, led me online to look into the author’s background – and so to the real tale behind this little legacy. And I can honestly say my life is richer for it – children’s book or not. Will it make the game more enjoyable? I don’t really think so. But I might be a fractionally better person for reading it.

And there I go again, having to try and explain everything in mathematical terms – so in honour of the Little Prince, I won’t give any rating this time. Let’s just say the book is as enjoyable as a sunset, while the game is much more fun than proper geography.

1 thought on “The Little Prince: Make me a Planet: A four-sided game (and book) review”