This is the third board game review I wrote at the ultimate board game website, Board Game Geek, earlier in 2011. It’s actually a card game, but they are generally accepted as falling into the board game category. As it’s one of my two favourite games (the other of which I’m yet to review), I thought I’d post it here first.

Race for the Galaxy is a game I’ve played a ridiculous amount of times without getting bored, which should give you an idea of its replayability. The original version plays nicely from two to four players and once you’ve learnt the rules a game should take less than an hour. With expansions you can add a fifth player, or even play solo. The original game will only set you back around £20 on Amazon.

Race for the Galaxy is a science fiction card game. Players play ‘worlds’ and ‘developments’ in front of them to accumulate victory points (needed to win the game), choosing an action each turn to let them pick up more cards, lay cards or trade and produce resources (which in turn get them more cards and/or victory points).

Race for the Galaxy has something of a learning cliff, rather than a curve, but once you’ve mastered the rules it can be incredibly rewarding. I’ve clocked up more than 100 games over the past two years and am in no danger of burning out.

What makes the game so initially mind boggling is also the key reason for its staying power – the variety in the cards. There are more than 120 in the initial set – one of each of 64 worlds and two of each of 31 developments – so 95 different cards. When you think you are drawing and/or discarding/playing them every turn, the amount of possible combinations is staggering. For me, this is the key to its replayability.

However, there is no getting away from the fact the iconography on the cards can be baffling at first (OK, for weeks). We had a lot of fun learning the game as a small group, making discoveries about rules and combinations as we went, but I’ve found it a tough game to teach new players (San Juan can certainly help in this regard, as it’s ‘Race Lite’ tag is well founded). That said, I’ve found new players do generally tend to see the worth in the game early, and want to learn, which helps.

Of course, it being a card game with a massive variety of different options, there is a lot of luck involved in every game. The same initial hand/strategy choice could lead you to 15 points or 50, depending as much on the luck of the draw as a player’s skill. However, this is another key to the game’s worth – you are constantly battling with the decision to stick to a grand plan that may well fall through, or adapt to the latest cards you’ve been dealt. 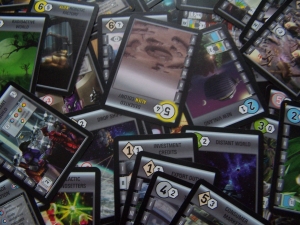 While interaction between players is limited in terms of actual contact between cards/actions (you don’t attack other people’s planet cards until a later expansion and even then it is pretty half-baked), there are subtle interactions at play throughout each game. For example, working out other players’ strategies can be key to a win if you can second guess which action they are going to perform (each other player will also do that action in a turn) and profit from them, while playing an action yourself that will only benefit you.

And I’ll close on a point I think is incredibly important for a great game – enjoying playing even when you’re losing. There are of course some exceptions, but generally I enjoy the game because you do get the feeling you’re building an empire (in less than hour too). It may rise to victory, it may fall on its face, but the experimentation and satisfaction of finding new combos is often as satisfying as a win (both, of course, is the sweet spot!).

And herein lies more interaction – the discussion of nice combinations, exasperation at a player laying the killer card that rounds out their empire etc. You will want to watch what your opponents are doing to profit from their actions, either in this game or in future ones – players who see downtime in Race for the Galaxy are probably missing out on learning a few things, or maybe even winning the game.

I play Race for the Galaxy because I feel the time I’ve put into learning its nuances has been rewarded. The theme fits perfectly, while its expansions have added even more to the experience and I look forward to future incarnations appearing. It is also a fun social experience that is involving and brain taxing, while there are enough random elements to mean everyone should get a few wins over time. Overall, while not for everyone, it’s a truly great game.

(This review originally published at Board Game Geek on May 12, 2011)

2 thoughts on “Board game review: Race for the Galaxy”